Translations: Which One is the Right One?

How many times have you heard that we can’t trust the Bible because there are so many different versions or that it has been changed multiple times? Maybe you have heard someone else make a comment about a translation either good or bad? Even worse, skeptics or unbelievers will make a claim that some word in our current versions today was not in the original version adding doubt to what it says. With so many different versions which one is right or should you choose? In this blog, we will look at some history behind the translations, the differences between them, and some basic terminology you will want to be familiar with. We will dig deeper into this issue in a later post. 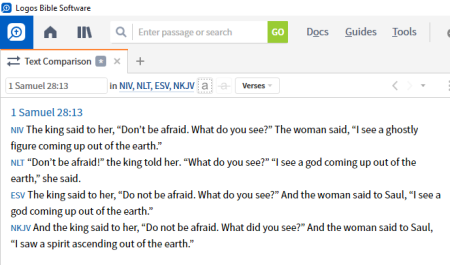 Autograph – The original document that was written.

Manuscript – A hand written copy of the original document. The copy could either be a copy from an autograph or another manuscript. There are other types of copies that were made (minuscules, codexs, and unicals) but we will save those for later.

Textual Variant – A single difference between two manuscript copies. They could be as little as a single letter or word and occasionally longer phrases, or entire section.

Family of Manuscripts – A group of handwritten manuscripts that share characteristics and similar textual variants usual by a location.

Translation – A copy of a text from language to another. There are some translations that keep the same original language but cover a longer period of time and are considered a translation by the larger changing of words and idioms because of their defining cultural differences. For Example: The 1611 King James Version is a different translation than the 1900 KJV translation that most people use today.

The best option is to read the Bible is in its original languages (Greek and Hebrew) but for anyone who has not studied the languages their only option left is to read a translation.  Are you ready for this next statement? “There are no perfect translations.” Any time you go from one language to another it is not a literal word to word translation.

There are a number of reasons why translations differ from each other. The first reason is because of the theory of translation that is used. Translators can aim toward a  formal equivalent style (word for word) where they try to match words directly from the original language to the receptor language. These are often called “literal” translations but, remember this is not completely accurate as literal word for word translation is impossible. The KJV, NKJV, NASB, ESV, and Interlinear are examples of formal equivalents.

Translators can aim toward a dynamic equivalent or functional equivalent style (phrase for phrase) where they attempt to convey the message in a more readable manner through grammar, language, and style. For examples they may update biblical weights, lengths, and time measurements or change cultural idioms to match the current idioms understood today. The NLT, NIV, TNIV, NRSV, and CSB are examples of dynamic equivalents often used today. 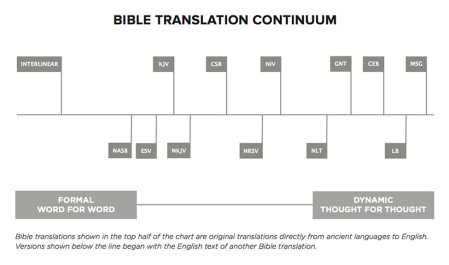 A second reason why Bible translations differ is because of exegetical decisions that the translator(s) make based on the language and the context that it is within. The screenshot above with 1 Samuel 28:13 is a perfect example of this reason. Both the NLT and ESV use the word “god” in their translations while the NIV uses the word “ghostly figure” and the NKJV uses “spirit.” The original Hebrew word used is “elohim” and you might be familiar with this word as a name for god. This is true a vast majority of the time but occasionally elohim can can also be used in other senses as well meaning angel, spirit, or a spiritual being.

Try This: How many different ways can you use the word “hand” in a sentence? I can think of about eight different ways the word is used and means something different in the context its used.

Another place in Scripture where this exegetical decision-making is found is in Psalm 8:5. The different translations use “angels” (NIV, NKJV), “God” (NLT), or “heavenly beings” (ESV). But what makes it interesting is that the author of Hebrews quotes Psalm 8:5 in Hebrews 2:7 and uses the Greek translation of the Old Testament (The Septuagint) which uses the distinct Greek word for “angels.”

Textual Criticism is another reason that some translations vary in their wording. You can imagine that because we have so many manuscript copies of the Old and New Testament documents that there are quite a number of textual variants between the copies over the hundreds and even thousands of years that have passed. It is not my aim to dive into a deep discussion on textual criticism in this post, I will save that for another post. Because of the differences between some manuscripts or family of manuscripts sometimes translators are forced to make a decision about which word to use because of a discrepancy. However, there is no reason to fear these textual variants. 99.5 percent of them are missing/added letters that might change a word into another word.

Try This: How many English words can you change into a different word by adding or deleting one letter? Example: Bran –> Brain or There –>Here.

The remaining half a percent of variants are minor and do not change any doctrine or theology that the Bible teaches. The translators will examine the remaining texts in question and choose the word they believe the original text their manuscript represents. Again, have no fear, most modern Bibles today will put the opposing variant in footnotes at the bottom of the page in your Bible so you can see the differences yourself. This gives us confidence and comfort knowing exactly what we have. 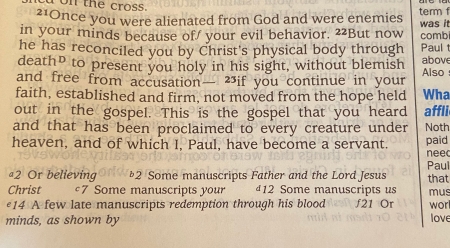 These variants usual are separated by the different families of manuscripts because of the “inbreeding” that occurs copying other manuscripts in nearby locations. There are generally 3 families that are recognized by location; Western (mostly Latin) texts from Italy and the West, texts from around Asia Minor in the east (Byzantium, in what is now Turkey), and those from Egypt, particularly Alexandria. The Alexandrian texts are currently the oldest surviving manuscripts (thanks to the dry Egyptian climate) but the Byzantine manuscripts are far greater in number and can allow greater accuracy in seeking the original text. The majority of current scholarship leans toward the Alexandrian manuscripts as the more accurate.

The example in the picture above, from Colossians 1:14.

One final area that causes translations to differ is the constant changing through time that words seem to undergo. A classic example is 1 Peter 2:12 which in the KJV the word “conversation” is used and in newer English versions the word “conduct” is used instead.  This is because in the time that the KJV was written the people would have understood conversation to be how they conducted themselves while today we would understand conversation to refer specifically to speech and not actions.

You may have seen the article floating around social media about the word “homosexual” being added to the Bible. In Greek, Paul uses two words that make up the English phrase  “men who practice homosexuality” (ESV).  Arsenokoitai and malakoi are the two terms that Paul uses.  One for the male active partner and the other for the passive partner. So in the KJV (before the term was coined by a German psychologist) you have the phrase “nor effeminate, nor abusers of themselves with mankind.” In later translations the word “homosexuals” replaces the long phrase in the KJV translation.  In Greek Arsenokoitai literally means “men who bed men.” If you want to dig deeper on this subject you can read my blog Open Letter to Bishop Richard Wilke here.

There are other reasons why translations may differ but these are the main reasons. Now lets finally get to the questions I posed at the start of this blog. Which translation is right? Are some better than others?  Which one should I use? Answer: It depends. Obviously, there are some bad translations, like the New World Translation (NWT) that is used by the Jehovah’s Witnesses to support their view that Jesus is not God. Another, the Queen James Bible (also known as the gay Bible) which was translated to take the recent liberal interpretation of anti-homosexual passages and twist them toward an affirming position.  I am not familiar with every English translation (there are over 100!) but the main ones I have referenced in this blog are solid. I do lean to the more modern translations and not on the KJV or NKJV because recent archeological discoveries have gifted us with more and more manuscripts from which to compare with.

Which one you choose may depend on what you want to do with your reading. If you are wanting to read in a more devotional manner you might pick a free or functionally equivalent translation so you can read without having to stop and look up the meanings of things. If you are wanting to dive deep and study slowly you probably would prefer a formal equivalent to get as close to the text as possible. When I am studying or preparing for a Bible study or sermon I like to use two or three different Bibles side by side. This way I can see the differences and something that might be difficult in one translation is explained through the wording of another. If you are memorizing Scripture you might want to stick to one translation consistently. Many people enjoy the poetic feel of the KJV over the more modern versions for this.

When choosing a translation keep in mind that some are translated by a single person and others might be translated by a team or committee. Those who use a committee are more likely to debate the hard choices of words and will often put the minority opinion wording in a footnote at the bottom. It’s always better to have multiple minds looking at an issue unless you know those minds have an agenda ahead of time.

Finally, there are some recent translations that have gone to a gender neutral approach. The NIV 2011 edition is one example. Where Paul or another author would address a group of male and female believers as “brothers,” the newer versions will replace this with “brothers and sisters” or other places that generically point to all believers in the male pronouns will use gender neutral pronouns like “they” or “persons.” There are some issues when doing this because it often changes the pronouns from singular to plural by necessity. John 8 is an example of this, “Let him (singular) who is without sin cast the first stone” becomes “person” because “them” is plural. The main point is to be aware of these changes as you study.

Feel free to share what translation you like to use and why you like that translation. There is much more on this topic and we have barely scratched the surface on this. There will be other posts later dealing with specific things in the future.