It’s Good Friday, and I figured it would be good to pull out a little C.S. Lewis.  The Liar, Lunatic, or Lord proof is one of C.S. Lewis’ most famous use of reason and the law of excluded middle.  The law of excluded middle is often called the either/or law.  I will borrow an example from Ravi Zacharias to explain the law of either/or.  Imagine my wife and I are taking a walk down the street together and another couple that knows us walks up to us and makes the statement “Congratulations, I hear you are pregnant.”  At the same time my wife says “yes” and I say “no.”  The other couple stares in confusion and shock, wondering what is going on.  My wife cannot be both pregnant and not pregnant at the same time.   There is an explanation for the different answers.  Perhaps my wife hasn’t told me yet, perhaps we agreed not to tell anyone until after a certain time has passed, perhaps there might be new trouble in our marriage!!  But we know that she cannot be both pregnant and not pregnant at the same time.  One of us is wrong.

Jesus is the center of Christianity, even many other religions claim some part of Jesus either calling him a prophet, a good moral person.  Jesus made some bold claims as he taught the people, the biggest Jesus made was the claim that He was God.   Several places in the scriptures Jesus claimed to be God some of the more popular scriptures are. John 8:58, John 10:30-33, John 1:1,14.  There are many other statements and examples that we can pull from scripture, but not at this time. Jesus forgave sins, allowed Himself to be worshiped, among many other clues from other people.

Using the Law of excluded middle we can see how Jesus claim to be God was really the only one that makes sense.  You can see from the chart below of how it flows. out with the either/or law. 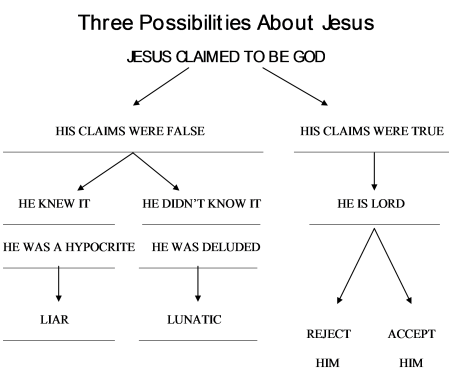 If He was a liar consider the following results:

1. He deceived people on purpose
2. He was a terrible blasphemer (Claim of God)
3. He was a hypocrite (Told others to tell truth & He lied)
4. He evil because He claimed to forgive sins
5. His followers trusted Him for eternal destiny
6. He was a fool, for He died for His lies.
7. He is not a great moral teacher because of this list.

Of all the results above, I find the hardest to believe that Jesus was lying and He went to His own dead on a painful cross for nothing.  I don’t know anyone who will die for a lie THAT THEY KNOW is false.  It doesn’t make sense.  However, what if Jesus just thought He was God, He believed it, and perhaps was crazy or a lunatic.

If He was a lunatic consider the following:

1. There is no evidence of Jesus being abnormal or imbalanced.  A lunatic is typically only into themselves and doesn’t care about others around themselves.
2. Unlike a madman, Jesus always demonstrated the greatest composure under pressure.  For example when religious leaders questioned Him, when crowds tried to stone Him, even when He was on trail for His life He was calm and in control.
3. Jesus was too wise, loving, and creative to be crazy.  If he was crazy we should all hope to be crazy also.
4. Mad or Insane the miracles and resurrection stand on their own.
5. The disciples would have obviously recognized a crazy man after spending 3 years with Him side-by-side in ministry.

Those two possibilities don’t seem to make a lot of sense, that leaves us with the third possibility which is Lord.  Jesus is who He says He was and it is either our choice to choose to reject Him or accept Him.

Originally in C.S. Lewis’ explanation there was a 4th category of Legend.  But since his writings in the mid-19th century a great amount of external evidence to Jesus outside the Bible has been discovered through other Christian and even non-Christian historians that make Jesus a historically a real person.

One other objection I have heard over the last year was that perhaps Jesus was a real person, but never claimed to be God, and after His death the early followers and church made up Jesus to be something greater, like God.  The problem with that argument is that many of the early Christians, even most of Jesus disciples died a martyrs death faking a story, creating a lie, and trying to keep it going.  The idea that the early church in the 3rd and 4th centuries changed the writings of the Early apostles doesn’t fit either because of the sheer amounts of manuscripts that were created as Christianity was being spread.  It would be very illogical to think that the church could get hold of every single manuscript and change them.

As always, questions, comments, and discussions are welcome.  Have a great Good Friday and remember it’s Good for us that Jesus died for our sins.

This entry was posted on Friday, April 6th, 2012 at 6:50 am and is filed under Uncategorized. You can follow any responses to this entry through the RSS 2.0 feed. You can leave a response, or trackback from your own site.