As some one who is skeptical of evolution, I am looking for more in the fossil record that tightly connects fossils between different genus species, which is what the claims of Evolution make.  In other words, more of the evidence that macro-evolution is valid.  So at one point I would say that yes, there are transitional fossils that show a change from one type of prehistoric turtle to another turtle or one type of prehistoric horse to a more modern style horse.

In Darwin’s theory of Evolution he acknowledge himself that in order for his own theory to be proven it would have to be found true in the fossil record. 2  These types of fossils he was hoping to find have yet to be found.     You may have seen pictures of the famous tree of life drawings that Darwin and evolution supporters have used to explain.  The simplified drawing in my blog comes from a book by Chris Sherrod. 3  It is meant to serve as a simple example of the tree of life, other drawings are often more complicated.

I have repeatedly asked people to give me examples of transitional fossils between species and I get 2 responses typically.  First, there are none, because fossils are hard to come by and the transitional ones have been destroyed due to fossils becoming fuel for us greedy humans to use up as energy.  Secondly often bad examples start popping up.  I’ve been told to look at Wikipedia, I’ve been told look at videos on YouTube that people have created with a type of “flip book” effect, and I’ve been shown pictures of prehistoric animals that could pass for a modern-day type of animal.   Here is why I call these bad examples.  The list on Wikipedia is there, and it is long, BUT, most of the pictures of transitional fossils are drawings, artist interpretations, not even based on real fossils found.  There are a few small bones, that are from incomplete remains, but most are drawings.  The YouTube video that is highly pushed also falls under the same boat.  They are drawings.  The pictures of actual fossils found I can easily take a few seconds on each one and call it a member of one of the species that we have today. 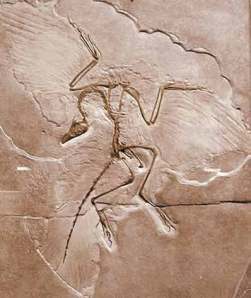 very once in a while someone will bring up the Archaeopteryx, which was discovered 2 years after Darwin wrote The Origin of Species.  You can see from the picture that it is a very interesting fossil for more than one reason.  It is complete and in good condition and appears to be a combination of a reptile and a bird.   Evolutionist said this was a true transitional fossil and crowned it as evidence.  But since it was found in 1861 a majority of scientists believe now that it is most likely a strange type of bird for the following reasons.

1. It was not really a good transitional fossil, because of the fully formed wings and fully formed tail it looks more like a creature that would stand as a different animal, not one in transition.   It’s wings, tail, and claws suggest it was a type of bird possible related to the liaoningornis, recently discovered.

2. The Archaeopteryx was dated to be in the Jurassic period in which birds had already been established in by thousands of pre-dated fossils.  It doesn’t fit the time sequence if birds had already evolved.  HE must have been a “late bloomer.”

3. Lastly, there has only been 1 fossil found of the Archaeopteryx.  It is in the Natural History Museum in Berlin, and not a standard re-occurring fossil that we find all over the place. 4

The Fossil Record does not look good for supporting Evolution.  Scientists know this and that is why they have come up with some alternate theories about the fossil record, trying to fit  a square (Evolution) into a round hole (The fossil record).  In 1972 Steven Jay Gould & Niles Eldredge  proposed a theory called “Punctuated Equilibrium.”  This is the idea that evolution happened in quick  “spurts”  rather than over a gradual slow process.   There are 2 problems with this theory;

1. There are no transitional fossils found that support this theory.  It would be absurd to think that the organisms would change over night.

2. P.E. goes against all current knowledge we have with DNA and adaption.  For an organism to change like that would  go against all DNA and genetic science that we know about. 5

Going back through the layers of rock there is an interesting discovery between the pre-Cambrian ad Cambrian time periods.  In the pre-Cambrian rock there are few fossils and most of the fossils are invertebrates, but at the dating of the Cambrian rock there seems to be a this enormous amount of fossils of many different kinds and types.  This time has been called the Cambrian explosion, because it appears that these fossils came out from nowhere.  Each side of the argument between creationists and Evolution supporters have their own ideas about why this is so.

I will look at the ape-men fossils in the next post, I don’t want to get to long-winded with this post.  If you have any questions, comments, rebuttals please feel free to leave them.

4. – Rhodes, Ron, “10 Things You Should Know About the Evolution and Creation Debate.” Chapter 4

5. – Rhodes, Ron, “10 Things You Should Know About the Evolution and Creation Debate.” Chapter 4

This entry was posted on Wednesday, April 4th, 2012 at 11:25 pm and is filed under evolution. You can follow any responses to this entry through the RSS 2.0 feed. You can leave a response, or trackback from your own site.

One Response to Evolution On Trial: Fossils Take the Stand